PowerPoint has been the least updated software in the whole Office package for most of its life. The basic building blocks beneath the menus have barely changed since Office 95, but the latest PowerPoint 2007 finally sees some very powerful features and abilities. Not all are entirely compatible with previous versions.

Master slides have always been part of PowerPoint, and multiple masters were introduced in PowerPoint 2000, but there were some interesting issues in trying to use them. The big issue with the earlier PowerPoint was that you could set up the title and text masters, but you couldn’t set up the actual layouts that people would apply in a presentation. This meant that a two column layout couldn’t be much different to the single column layout. Equally, this introduced problem that couldn’t be changed at all. This simply encouraged users to go ‘off piste’ and do their own thing, regardless of what the design required. With most people having no training in PowerPoint, they tended to assume that the layouts are the same as the masters, but this is not true. A layout is a set, unmodifiable format ‘based’ on the default slide master. PowerPoint didn’t allow us to change the layouts, and some clever thinking and set up of the masters is all that can be done to help the user in applying the right layout. 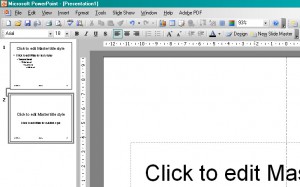 PowerPoint 2007 changed this in a number of ways. The new masters format combines both the masters and the layouts in one master setup. A master IS a layout, and visa versa. This improves the things you can do in PowerPoint a great deal and now allows us to set up correctly laid out slides that more closely follow the corporate identity or functionality of the template. There are some problems, which relate to using the presentation with previous versions, as the new format and masters are not entirely compatible in either direction. Using the compatibility mode, introduced by Microsoft, is often the saving grace in this situation, but not always the complete solution. If you are using more than just the latest version, download and install the Compatibility Pack from the Microsoft website and install it in Office 2003.